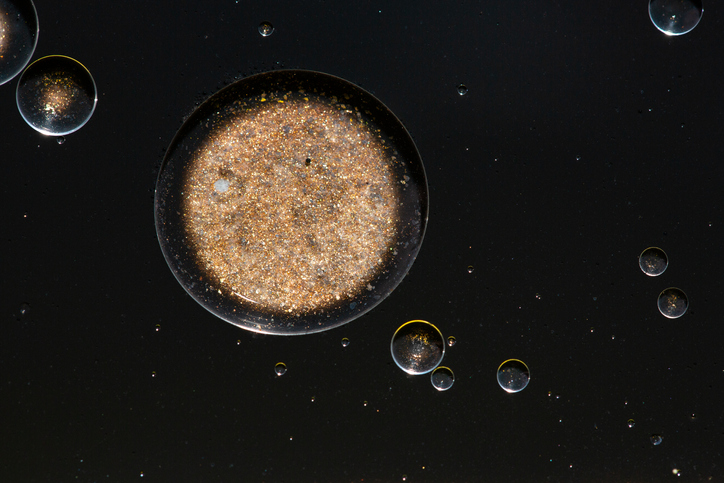 Gold nanoparticles possess unique optoelectronic properties due to the presence of a surface plasmon resonance band. These characteristics can be tuned, providing potential applications in biochemistry (1,2) such as plasmonic photothermal therapy (2,3) and drug and gene delivery applications(2,3).

A major drawback for in vivo applications is the interactions of gold nanoparticles with biomolecules, such as opsonins, which prevent other molecules reaching close enough to the particle surface. This has been most effectively overcome by coating the particles in polyethylene glycol (PEG) to create a thin hydrated barrier that sterically prevents opsonization.

PEGylation of the gold particles is usually carried out in a two stage process in which the synthesis of gold particles is followed by attachment of the thiol-modified PEG. Nitica et al. (4) have developed a novel simplified single-step procedure.

The complete preparation is achieved by uniformly heating in a microwave oven, for 2 minutes, a solution of PEG 1000, H[AuCl4] and NaOH in ultrapure water produced by an ELGA LabWater Chorus 1. The purity of the ultrapure water is critical as any particulate, ionic or organic impurities can seriously interfere with the procedure.

The gold particles produced were shown to be highly mono-dispersed with diameters very largely in the range from 30 to 45nm. The PEG coating is about 3nm thick. When studied by TEM, FT-IR and UV the particles show the expected characteristics. They show considerable promise for use as a substrate in Surface Enhanced Raman Spectroscopy (SERS).